Optimisation is a powerful methodology not only to identify the optimum solution but also to gain valuable insights from physical and design perspectives. We have been conducting extensive research by applying state-of-the-art optimisation techniques to a wide range of complex multi-objective, multidisciplinary problems in the endeavour to realise future space transportation systems and advanced space missions.

Population-based, heuristic optimisation approaches are of particular interest due to the global search ability that can robustly explore complex, nonlinear design space, in contrast to gradient-based, local search methods, which are inherently susceptible to local optima. In particular, we make active use of the evolutionary algorithms, a type of generic algorithms based on Darwin’s Theory of Natural Selection; (a) a set of individuals/species (designs) is prepared in the population pool at the first generation, defined by decision variables (design parameters) in a quasi-random manner; (b) the population is evolved at each generation via operations based on the natural selection principle, i.e., crossover, selection, reproduction and mutation; and (c) only superior species/individuals (designs) can survive and evolve over generations, which renders the population at a later generation elites as candidate optimum solutions.

The optimisation process is performed iteratively in a sequential loop consisting of the optimisation algorithm, which produces the first/next population via the evolutionary operators, and the evaluation of the objective (cost/merit) function for the given values of the decision variables (the example displays the optimisation loop for CFD-based optimisation including mesh generation, CFD computation and post-processing of the simulated flowfield). 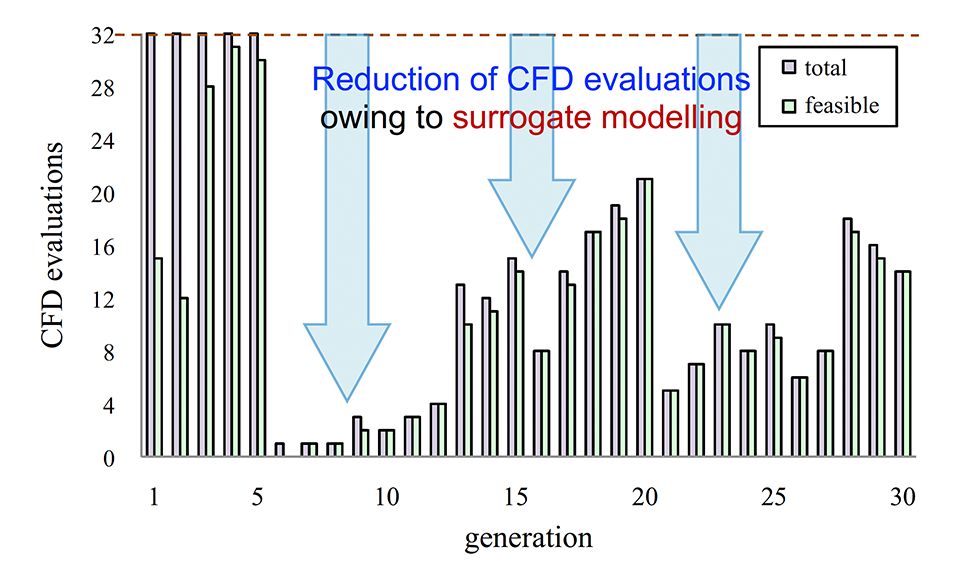 Saving in computational time due to surrogate modelling

Population-based optimisation approaches, albeit their robustness, inherently require a large number of evaluations and thus incur substantial computational cost due to their heuristic nature. Surrogate modelling (Queipo et al. 2005), however, can strongly assist with population-based optimisation by being able to identify the correlation between the decision variables (input) and objective functions (output) based on the solution archive of evaluations after several generations. Objective function (output) values for a given set of decision variable (input) values can be able to be predicted by surrogate models in lieu of evaluation, thus greatly reducing the total number of evaluations required for the overall optimisation, as demonstrated in the figure. Surrogate models employed in our research include: quadratic response surface model, artificial neural network (ANN) models including the radial basis function network and multilayer perceptron model, which are single-layer and feedforward types of ANN models, respectively, and kriging model based on Gaussian process regression.

Population-based optimisation based on surrogate-assisted evolutionary algorithms therefore serve as a powerful, effective methodology, enabling advanced design and research for highly complex nonlinear problems for various advantages including; (a) global, robust search capability; (b) ability to handle multi-objective optimisation problems without using weighing; and (c) valuable insights gained from post-processing of the solution archive, which is an extremely rich mine of information based on physics. We have been conducting extensive studies by applying this approach to various complex problems including scramjet optimisation problems, which typically result in a Pareto optimal front that is indicative of counter-acting (trade-off) characteristics between objective functions, as exemplified in the figure.